No humans were harmed in the making of these images, but I can’t speak for the animals; it was a butchers, after all. These images are not for the faint hearted, or the easily disturbed. You could argue they are sensationalist, but first and foremost they were created to stimulate debate about meat production and consumption. Even, Life & Death.

There are cultures that consider death in the highest regard, there are cultures that hide away from it and treat it as a taboo subject. Particularly, in a world where the majority of meat consumers are disenfranchised from the source of  meat, bought shrink wrapped off the supermarket shelves, albeit with higher levels of hygiene. In contrast, the butchers where this photo shoot took place has been established a long time, well over 100 years and images of the business in it’s early days, show the shop front strung with carcasses of meat.

What about the effects of meat production on the Worlds Climate, scientific evidence clearly shows the ‘meat industry’ contributes overwhelmingly to carbon emissions. We need to reconsider our approach to food, particularly our meat consumption. We have evolved to eat meat, historically at very special occassions and exceptional circumstances. Largely in celebration, whilst the majority of our diet was, is and should be grains, pulses, vegetables and fruit. Perhaps even, as in some parts of the world insects.

Would you eat insects? Would you become Vegan? Would you just buy meat that has been locally reared, so you can see the standards of animal welfare, count the miles it has travelled. Or buy organically produced meat, so standards are usually guaranteed?  Whilst you may not say ‘grace’ before your daily meals, do you give thanks for the life given in order to sustain your own?

Consider this, in a future, over popularised world, where the production of meat from animals is outcompeted by the consumption of meat by man, if we’re not growing meat in petri dishes will humans be marketed for meat? Avatar, Cloud Atlas, The Road and Delicatessent (and more besides) have all addressed this possibility directly, or indirectly, metaphoriacally and surreally, often horifically. They may just be films, but what would you do tomorrow? What will you do today?

A series of 6 of the images were exhibited at the Jolly Brewer Pub, Lincoln, UK  February – April 2013, to mixed views and appreciation, but largely all positive. Especially, at a time of the Horse Meat Burger Scandal. 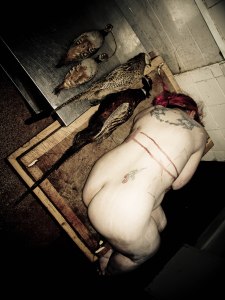 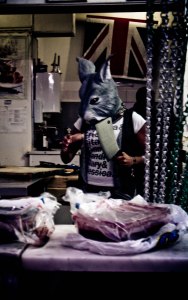 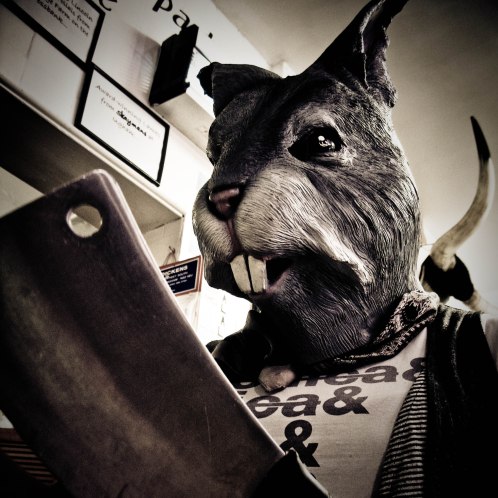